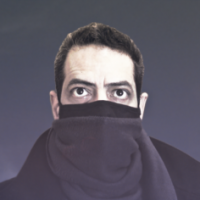 So here's a little test with the camera tracker. I was waiting to be able to use this for a while now.

It's a very first step, and I want to thank @FilmSensei for his tutorial, and also his tutorials on how to import mixamo animations into HitFilm 👍️

So, as long as it's an horizontal shot with a clear ground, it's OK.

Now when I tested other camera moves and shots, the whole thing went all over the place... but I guess that's a whole other level for later