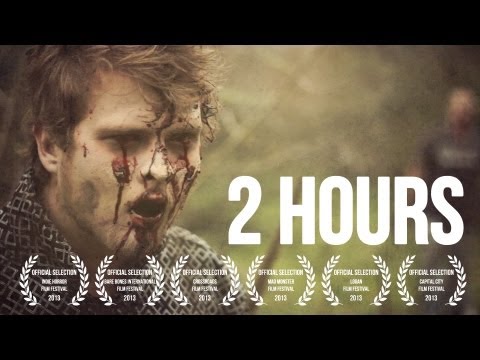 2 HOURS is a post-apocalyptic action thriller, telling the story of a lone survivor, who finds himself infected with the virus. The film follows his journey of survival, with only 2 HOURS to obtain the cure. This short was created with no-budget, with a skeleton crew of only three people. 2 HOURS was shot entirely on a single Canon T2i, with only two lenses, and extremely limited gear.
The film has been submitted to Sundance and Slamdance, and we are looking to enter into a number of other film festivals. If you'd like to show your support for the film, or would like a copy of the film on DVD, please visit our Indiegogo page ― all proceeds will go directly towards film festival submissions for 2 HOURS.
http://indiegogo.com/2HOURSthemovie
Director: Michael Ballif
Writer: Josh Merrill
Starring: Josh Merrill & Brooke Hemsath
Production Designer: Allen Bradford
Producers: Michael Ballif & Josh Merrill
Original Score: Keaton Anderson
Editor/Visual Effects Artist: Michael Ballif
Special Make-up Effects: Allen Bradford
Sound Editor/Designer: Josh Merrill
http://2HOURSthemovie.com
http://facebook.com/2HOURSthemovie