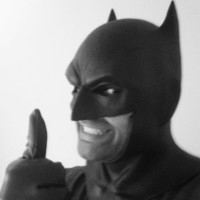 Followed Zach's tutorial, and made this. The animation is a bit janky in spots, but it was a good learning experience with the particle simulator. Shadows on 3d models are still a problem, but I've given up trying to find a solution for that. I just turned them off when they were too jagged and glitchy looking. Everything made using Hitfilm, and GIMP. Made one small cylinder in Blender to use a texture for the debris in the particle sim explosion. Oh, and the explosion is a stock footage form action vfx.

(I know the shots don't flow well. If I did it the right way I would story board them out first and make sure all the action is facing up the right way...but the poorly planned action editing makes it more like the latest actual Disney Star Wars shows lol)