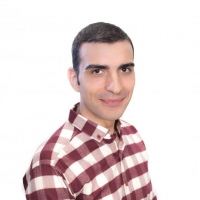 I saw this in an After Effects tutorial, I really wanted to recreate it and almost succeded. I say „almost” because of the Sphere effect in Hitfilm, that has to be redone! Please, FXhome, do something about this as it's a shame that we can't use it properly!

Being forced to use the „Remove Stock Background” effect to get rid of that unwanted/unnecessary/annoying black that appears instead of transparency, I get harsh edges and sometimes (if you look carefully enough) some empty spots along the sphere margin.

Having said that, I think it looks interesting anyway. As in the previous edits, the purpose was to work with shapes and especially „sphered” shapes, so I can see the vast posibilities of working with this effect.

Again, @IamJoshuaDavies, @OliThompson, @JavertValbarr, @TomCowles please do something and make this effect work in Hitfilm as it does in After Effects (to display transparency where the layer has transparency - not black!)