SirLewisFRostBite Posts: 9 Just Starting Out*
April 14 edited May 3 in HitFilm

i like having plenty of space on my timeline to see my keyframes. some of the things that are included alongside the names could really be shortened so as to conserve space.

i was thinking that the types of layers, [MEDIA], [GRADE], [PLANE] and such could be condensed into a symbol that will tell you what type of layer it is if you hover over it.

you don't have to combine the layer type icon and the label icon. you could even keep the icon in the same place as it was before, it would still save space. however, in the case of my concept art, hovering over will tell you both the layer type and the label.

most importantly, to parent it to another layer, click the button and the next layer you select will be the one it parents to. press esc to cancel parenting.

if you click the button while it has a parent, it will automatically let you replace the parent, if you click on the same layer that you're trying to parent to another layer, it will remove the parent. alternatively you can select multiple layers, right click and click some button that says remove parents.

if you select multiple layers and press the parent button, they will all replace their parent (or lack of a parent) with the same layer you select.

overall, this would save space and the parenting would be more convenient, as the title says.

now i know what you're thinking, "that's the most professional and convincing concept art I've ever seen, take my money." and while i would thank you, i, unfortunately, cannot be hired at the moment because I'm going for the big bucks to make millions with my professional skills. for now, i simply want these convenient features in my favorite free editing software because I'm totally not making videos because don't have the professional skills that i speak of, such a thing would be preposterous to assume. now I'm off to find my out where my own parent went to buy milk. 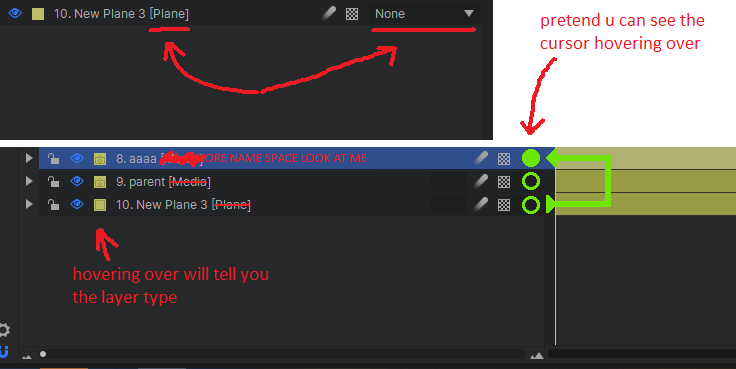