I have a box icon, (png image, with a border and transparent center).

The box is attached to a tracker. I would like the box to only render on screen if it is within an area on the screen.

First I tried to add a mask to the box, however the mask moves with the box. Then I found "set matte" and put it on the box and set the source to a matte (plane layer) whiich has the size of the area I want to show the box in.

Now the issue is that when the matte is fully shown (black), the box renders. However if I make the matte layer transparent, the box icon has the same transparency.

Then I have set the blend to subtract, which makes the box render only outside of the matte layer. 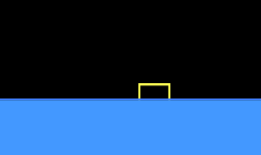 What I would like to have is for the green box to render when inside the blue area. The blue area is the matte plane which is the source for the box "set matte". And have the blue area transparent, without the box being affected by the transparency

This is how it looks with replace (blend) 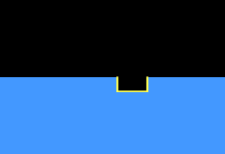 And this is how it looks with add:

I think I found a solution. I have checked invert on the "set matte" effect. Then hid the matte layer so it does not render, and the icon will then use the matte layer as a mask.