How to mask multiple text layers? 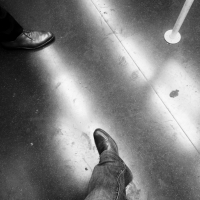 Hi, I need to draw a mask shared by different text layers.

I have a video where these texts have to come out from a bag so I need to hide and animate them.

I have tried to use a Set Matte on one text layer pointing to a non visible black plane and it works fine except that a plane is not the shape that I need as a mask:

I then tried drawing a mask on that black plane but the Set Matte still takes the whole plane itself and not the mask I drew:

I don't know whether the black plane or its mask should be set differently regarding blend modes etc...

I hope I explained the situation clearly 😁!!!