Keyframing " Witness Protection " off and on? 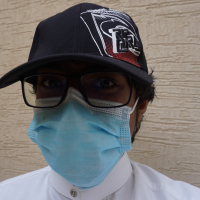 I was experimenting a bit and out of the various tools i've used, Witness Protection. Is it possible to sort of, turn it on and off? Right now my only solution seems to be setting the size of it to 1px and hoping nobody notices it.

is it possible to place a transparent "Plane" Layer in the composite shot and use it to blur the lower layers of the actual videos?