Looking for improvements to my settings/workflow

First of all, I'm just a random person on YouTube that likes to upload gaming videos for fun. I'm not particularly concerned with the best quality possible; all of the videos I've uploaded so far aren't the same nice quality from source video but I'm satisfied with them. Of course, any tip that improves/maintains quality more without sacrificing other areas too much would always be nice.

As I don't have a fast PC or internet, my biggest concern is that my workflow takes up a good chunk of my day and therefore I can't really use my PC or internet for other things while trying to get a video up which I do not like. Encoding a 20~ min video takes anywhere between 1.5-2 hours. Exporting that video from Hitfilm takes almost 2 hours. And then uploading that video onto YouTube can take 8+ hours. I delete the videos after I upload them anyway so I'm not concerned about the filesize in the sense of the size it takes up on my computer but I am concerned about the file size in the sense that I assume bigger file size means longer time to upload?

My workflow is as follows--I record my gameplay using NVIDIA's Shadowplay at 1080p, 60 FPS, 50 Mbps Bit rate. For whatever reason though, Shadowplay doesn't actually record at 60 FPS and the source videos sometimes end up being recorded at 30, 59.96, 57.16, etc... FPS. When I try to edit this source video on Hitfilm, the audio is very desynced so I found a solution where I encode the source video in Handbrake and then that encoded video is what I edit in Hitfilm. These are my handbrake encoded settings:

And these are my Hitfilm export settings: 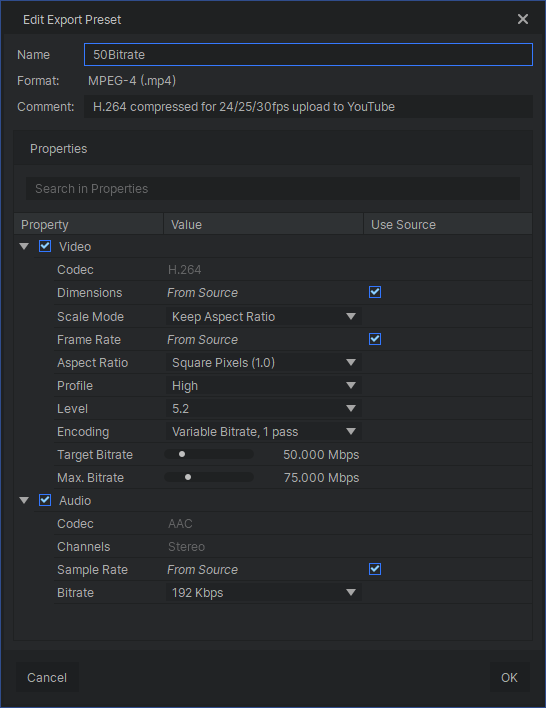 I've also noticed that the exported video from Hitfilm is approximately double the filesize of the encoded video, but around the same filesize as source video (at least for this particular video, not too sure about all the other videos I've done). To counter this, I recently tried re-encoding the exported Hitfilm video again using the same Handbrake settings to reduce the filesize back down again and that 2nd re-encoded video is what I upload onto YouTube. With my untrained eyes I don't really see a difference in quality when uploaded versus a video that was only encoded once, exported, then uploaded. Of course encoding for the second time also takes up time which is another almost 2 hours. I haven't really done a thorough test comparison for much longer videos (only tested with videos that are 1.5 mins long) to see if this extra encoded time compromise results in overall reduced workflow time because of possibly less time to upload, but it seems to be that way.

Is there anywhere here that I can improve for on my workflow starting from the recording of the source video all the way up to uploading it onto YouTube? Since Shadowplay doesn't seem to record at 60 FPS, should I be encoding it on Handbrake as "Same as source" or is setting it at the fixed value of 60 FPS fine? Since I'm encoding on Handbrake using a constant bitrate, should I be using constant bitrate on Hitfilm export too instead of variable bitrate?