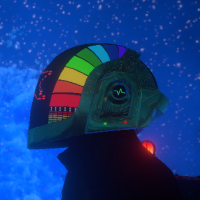 When I set the plane of my tracker, the ground plane occasionally flips upside down for a frame when I let it play through. Is there a way to stop that from happening?