Hello everybody. I have been tinkering with Hitfilm Express for some time and while I'm still learning how to use its many features, there's a particular effect I'm interested in creating which involves a cartoony character in a fantasy setting, said character is tiny and has an oversized head. I have seen a few video tutorials to achieve this in After Effects (see picture below) but none in Hitfilm, which I find a bit odd. 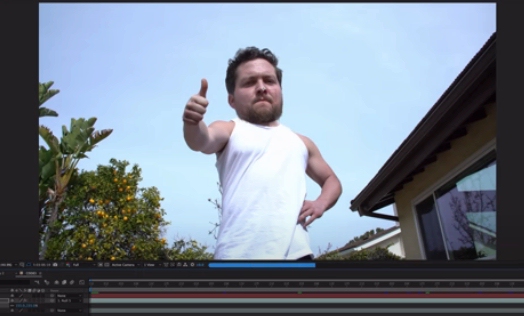 What I've been trying is: Import the green screen footage with my costumed actor, then duplicate that layer, put it on top and mask his body away. Finally, go to scale under 'transform' and change the head size. The result is pretty much the appearance of a costumed mascot or Funko Pop figure and its looks quite decent because the actor is standing still or simply nodding, so everything stays in place.

However, when attempting to do a scene with even the slightest of movement (such as taking a couple steps), the enlarged head 'goes off the rails' revealing the smaller head of the layer below, therefore ruining the effect. The only workaround I've found is through extensive keyframing, repositioning and mask editing, which is time consuming and makes it look forced and unrealistic.

Can I achieve this in a faster, simpler way? All I need is the big head at the top layer to stay glued to the neck of the smaller body at the bottom layer as it moves. I'm still not too familiar with the use of Planes or the tracking feature, will those help? Thanks in advance!