How might I create this effect in Hitfilm Pro? 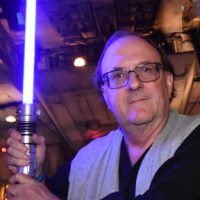 I'm a bit of a beginner level on video VFX work, so what I am looking for might be a feature that is already built in to Hitfilm that I just don't KNOW about. Looking for some help from the Hitfilm Collective Mind on this.

Picture an X-Wing flying in a planet's atmosphere at "speed". A TIE is behind it and shoots a laser burst. Oh no! It's a solid hit on a wing surface as the shields failed! It blows a hole in the wing.

The lasers coming in and the resultant explosion burst and all that instantaneous stuff is a piece of cake to get. It is the stuff for the next second or two in time post- laser hit that is my problem.

Now, after the explosion from the hit, there are damaged components (like wiring insulation and such) burning inside that wing, inside the jagged hole blown in the wing surface (also pretty easy to create). What I need to figure out is how to make the smoke that would be produced from that burning and leaking out of that hole look like it is being blown back along the wing surface as the craft speeds along in the atmosphere. That smoke would be moving very fast (hundreds of kph / mph) and would not look like the typical "smoke plume". It's be more a sheet of smoke, hugging the wing surface with some turbulence from the jagged hole, and also changing in nature as it hits and passes the wings trailing edge.

My first thought was somehow using the missle smoke effect. But in the close up-ish visual shot of the wing surface I'm composing, the X-Wing model is not actually moving in 3-d space. Plus it'd be hard to move the 3-d model that fast and for that amount of time anyway (I think).

Is there the equivalent of something like a "wind" effect I can add to 'blow' the missle smoke in a direction? Or maybe this is something for the general particle sim effect.... of which I am not very familiar.