You can find Andrew Cramers tutorial that he has on creating The Ring here:https://www.videocopilot.net/tutorials/the_ring/

I really enjoyed trying to create this in Hitfilm. Still learning a lot.

Re: How to apply effects to 3d unrolled object?..

You cannot place effects on a 3D unrolled model or particle layer.

Now, we delve way-way back into the history of Hitfilm for this....

First, a quick note on Hitfilm's Order of Operations:.

A Comp Shot or Editor timeline is rendered, layer/track, by layer/track from the bottom up. Once a single Layer/Track is rendered it's held for the next layer/track to render on top of it. Hitfilm does not return to a layer or track once it's been generated.

In "2D Compositing Mode" the model/particle sim is calculated and rendered to a 2D layer - a 2D picture of the 3D model - then passed to the Effects engine for the layer. This is the original compositing mode for Hitfilm and explains why 3D models/particle sims in 2D composite mode composite in LAYER order, not Z-space order.

"3D Compositing Mode" is just like 2D except the plane itself can be moved in 3D space. This is like moving any other 3D plane. It's a flat picture of the model moving in 3D space.

"3D Unrolled Mode" was introduced in Hitfilm Pro 3. In 3D Unrolled, the 3D model/particle sim is calculated, but is NOT rendered until the layer stack hits a 2D photo/video/plane/Grade Layer. At this point the 3D objects are rendered. This allows the 3D unrolled objects to correctly occlude in Z-space, but it also means it is IMPOSSIBLE to add effects to the individual layer, because the render of the layer is bypassed (skips the layer's Effects chain) until the next 2D layer is reached. Only at this point are the calculated objects rendered.

"Parenting a Grade Layer" isn't your option. Grades are usually described as "adding effects to everything below themselves." This is what using a Grade layer ACTS like, but is not what a Grade actually does. Grade Layers are forced renders of every layer below them which are then passed to the Grade's effects. Masks and the edges of the Grade layer are hard boundaries to any added effects, but areas where the Grade exists are always renders of the pixels directly below.The Grade Layer adds effects to ITSELF. Now, the effect's chain is different for a Grade Layer vs any other type. If I mask a plane, then add a glow or blur do it, the glow or blue will extend past the bounds of the mask. Grades don't work like that. If masking a Grade and adding an effect like Glow or Blur, the effect will NOT extend beyond the Grade's mask. Transforming a Grade Layer does nothing, other than mve the edge of the layer that cut off all effects. You could roto the 3D model, but the edges of the roto mask choke the effects. If you're thinking of adding a glow, it's not going to work.

Hitfilm 2017 added the next system. "Depth (Source) Layer," "Depth Mask," and "Depth Matte." With These systems you leave your model and particle layers in 2D mode and use one of the other tools. I won't be discussing "Depth Matte" here, as that's pretty complex.

It's pretty simple - A background plane with a fractal noise, a grade layer to "Flatten" the background plane, so I can use it as a Light Wrap source, a 3D Sphere, a 3D Cube. The Sphere and Cube both have Light Wrap effects and Glows on them. They are in 2D Compositing Mode.

Depth Source should ALWAYS be assigned to the object HIGHER in the Layer Stack. What Depth Source does is tells the 3D object to calculate, using the assigned source layer for occlusion, before rendering the layer and passing it to the effects engine.

"Depth Mask" is an effect version of the Depth Source. Depth Source only selects 3D models and particle layers as sources, Depth Mask allows you to specify 3D plane/video/photo layers.

Is official greatness started here on the fxhome forums

So I was watching my fill of corridor digital and their VFX react series when they Sam, Niko and Freddie, went down memory lane About how they started on the FXhome forums as newbies and saw some early amazing work by another user using the early Hitfilm software and we're like we can do that at home wow..

Totally worth a watch

Now, new Shaders and map types for 3D models has been my top wishlist item for awhile, so I'm super-ultra-mega-happy about this, but, because I'm pedantic, I must point out that Cook-Torrance and Blinn-Phong are PBR shaders. Yup, Hitfilm's ALWAYS been "PBR."

But those metallic-roughness and specular-glossiness shaders will add a lot of power.

Vo recording? Much requested. H.265/HEVC import? That's gonna save the Moderators a lot of time on telling people to transcode. Custom Light Flares? They're beautiful!

AAF import/export in Pro is a SERIOUS game changer. For a long time Hitfilm "hasn't played well with others." This starts to change that. Oh, yeah....

Re: Film Sensei's Stuff: The Chess Board Visualization Effect from The Queen's Gambit (January 22, 2021)

Check out my newest tutorial video... How to use the Built-In Transitions in HitFilm Express! 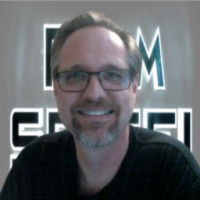 Re: Using FXHome footage for testing.

I've made the Footage available in the following link;

Do let us know what you create as we'd love to see it, and May the Force be with You!

I think I've found a bug. I added an "End Credits Craw"-Effect and adjusted everthing, but as soon as I change the font, it won't update the text.

After restarting Hitfilm Pro 15, the text gets updated...

Here is an example: